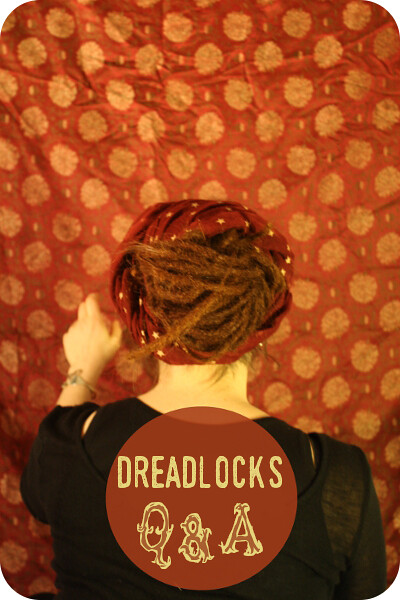 This post used to be a sub-page of my “about” section. I decided that it didn’t fit in there anymore but still wanted to keep the contents so I went with converting the page into a post. Here we go!

Getting there and Maintenance

Q: How long did it take to make your dreadlocks?

A: I had waist-lenght hair at the point and it’s pretty thick, healthy and straight, too. We had at least five sessions that each lasted several hours.

Q: And then you were done?

A: Not exactly. Dreads are never really “done”, they sort of… ripen with age. Like good wine. At first they are all strange and new and stick out in weird angles but the hair grows and eases into its new form and the locks felt more thoroughly the more you wash and maintain them.

Q: I thought dreads would cause your hair to get shorter due to the felting. Your hair is still pretty long, though…

A: My hair was rather long to begin with, about ten cm longer than the dreads at the beginning. I also opted for open tips which keep a good part of the length. The shortening also depends on the thickness of the dreads and how curly your hair is.

A: Yes. YES! I couldn’t even sleep well during the initial progress because my scalp was so sore. The pain (and weirdly-sticking-out-of-your-head hair) wears off as soon as your hair grows out a little, which took about a week for me.

Q: I always thought this didn’t work with straight hair.

A: Yes it does. It’s just much more work.

Q: Is there a way to make the progress easier?

A: Destroy your hair. Crimp, blow-dry, bleach, wash with soap instead of shampoo, never ever use conditioner, leave the curling iron in too long, go swimming in the sea. Do everything magazine articles about having beautiful hair tell you not to do. But just be mean to your hair, don’t let it break.

Q: You don’t ever have to comb your hair, right? That’s a great thing for people who don’t want to spend time on their hair!

A: Uhm, no. Definitely no. Absolutely, definitely no. Dreads are high-maintenance hair. Especially in the first few months you’ll have to groom them for at least an hour per day and felt in loose hair into other dreads. This means you twist the loose ends that stick out of a dreadlock between your fingers, then stick a really small crochet hook trough the dread, catch the twisted hair with it and pull it through the lock. This is a horrible task, especially with the top of the head. Not only does it hurt your scalp, until you’re used to it you’ll also have to do it in front of a mirror to see what you’re doing. It gets better, though, and if you take your crochet hook with you all the time you’ll finally have something to do during long train rides, boring lectures, evening movies and interesting discussions. It’s also a real conversation starter.

Q: But dreadlocks are unhygenic!

A: No, they aren’t. Dreads can be washed just like normal hair. Using soap instead of shampoo will cause the hair to felt better (which is what we want here, isn’t it?). You’ll even have to wash dreads less often than normal hair. Well-groomed dreadlocks are just as hygenic as every other haircut.
Drenching them in a mixture of soda, lemon juice, salt, apple vinegar and water and then rinsing them every few months is something to get deep-rooted dirt out, too.

Q: But I heard they can grow mould or algae…

A: In fact, yes, they can. There are a few conditions that would have to be fulfilled for that to happen, though: The thicker the dreads are, the higher the probability of mould. Thick dreads don’t dry as well as thin ones, so the humidity can cause the second condition to develope mould in the first place. That second condition is the presence of organic material inside the dreadlock. Don’t worry about embroidery or silk thread or felted-in wool, I’m talking pieces of leaves, sticks, mud here. Just be careful and wash or pick out any residues after days in the outsides, camping trips, food fights etc.. When in doubt, ask someone to help you.This particular problem is really easy to avoid! What bugs me, though is that dyeing dreads with henna is either a pain or out of question. Henna is, after all, made of pulverised leaves and really hard to wash out of normal hair already. I guess it’s hell with dreadlocks. I’m not sure how well it works with those henna pastes you can buy already mixed, though.

Q: You can’t do anything with dreads!

A: You can actually do the same things you do with normal hair. I even curled my dreads once, and there are lots and lots of nice hairdos out there just waiting to be tried with dreadlocks! You’ll never need to worry about elastics again, too, you can just fasten you hair with your hair. I also did my updos by just knotting severals dreads together. Awesome. 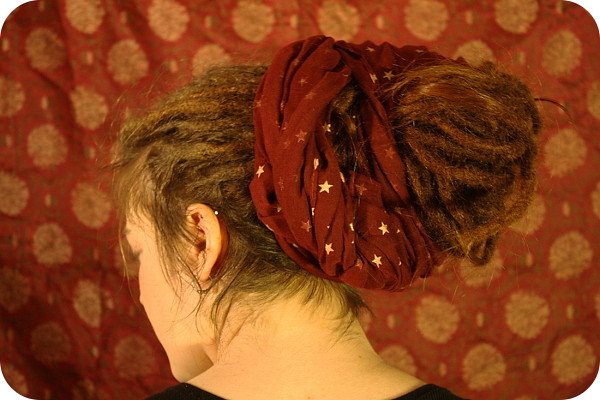 Getting rid of Dreadlocks

Q: Do you have to shave your head if you’re done having dreads?

A: If you want to, sure, you can shave your head.
The two other ways other than shaving your head is to let the dreads grow out a little without maintaining them, and then cut them off.
Or you take the really hard (and painful!) way of combing them out. If you have closed tips you should cut those off first – it’s easier to comb when you have a loose end to start from. You’ll need a LOT of conditioner and probably several patient people to help you. Even though this is the method you’ll keep most hair length with prepare to loose quite some hair due to your dreads keeping all you would have naturally lost during your dread time and all the hair that broke and got ripped while maintaining the locks.

A: I combed them out after cutting them at a bit above shoulder length. It took two people three nights of bingewatching Supernatural to get them out but at some point we knew what to do. We used forks instead of a comb, by the way, because they are sturdier.
I lost far less hair than expected and the hair that I kept was surprisingly healthy.

Q: Don’t you miss your dreads?

A: If fact sometimes I do. I can still braid them in if I want to, I kept all of them! It was easier to have a finished look to my hair and I never had a real bad hair day.
Hair care is much less fuss now, though, it’s amazing.

… and the random stuff aside from that

A: No, but I got that really often. I have never smoked pot and I don’t actually plan to.

Q: I think you looked better with dreads.

Q: I don’t think white people should have dreads.

A: Again, you’re entitled to your opinion, that’s perfectly fine. My archaeologist argument against the cultural appropriation allegation is that matted hair has been a thing outside of Africa and the Afro-origin culture for as long as people did things with their hair. My personal argument is that my dreads are not the product of my reverance of Rastafari culture or my weed consuming ways (see above) but something I did for myself, without a connection to any cultural phenomena – except maybe the records of Celts having matted hair, too, and therefore in memory of my Italo-Celtic foremothers. I don’t regret or feel bad about the fact that I had dreadlocks as a pale-skinned European.

As always, thanks for reading!