You’ve seen the projects, now prepare for the real tragedy…

I think Fridays might be my new uploading days!

Watch me declutter my stagnant projects and tell me what to tackle first! About some of the things in this video I already have blog posts, so here’s an incomplete (but alphabetical!) list of those:

Thank you so much for watching! ♥

Doneday (formerly known as Finished Things Saturday but now moved to Mondays) is the (usually) bi-weekly counterpart to my UFO Fridays. While there I show you what I’m working on, Doneday is about finished projects – I used to think that small things weren’t worthy of a separate post but now I just put them in this feature and feel less silly about it. They deserve it! For more Doneday, look here. 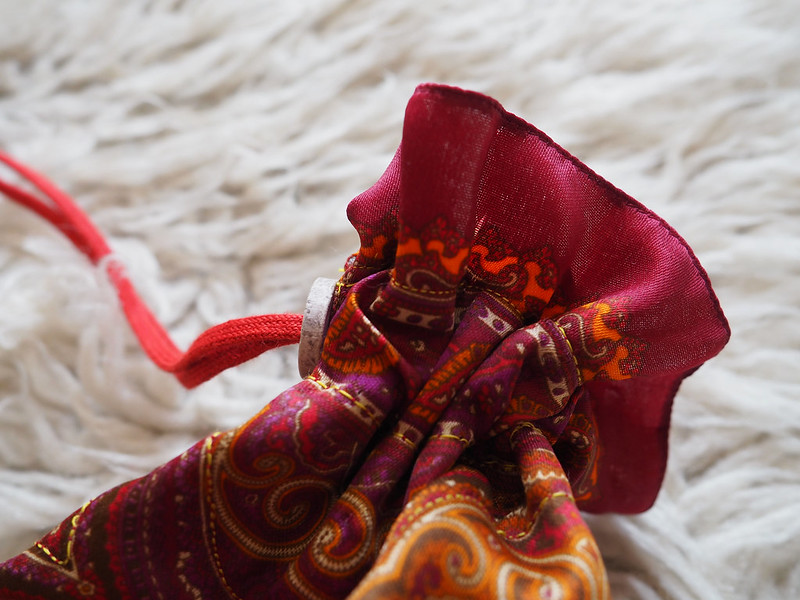 When I met my boyfriend he had been training modern arnis for quite a few years, wore almost exclusively black and thought carrying throwing knives was cool. Fast forward almost ten years and he’s long since switched to Jiu-Jitsu, wears a lot of tie-dye and took to sewing his own pants. The arnis sticks, or bastons, however, stayed. 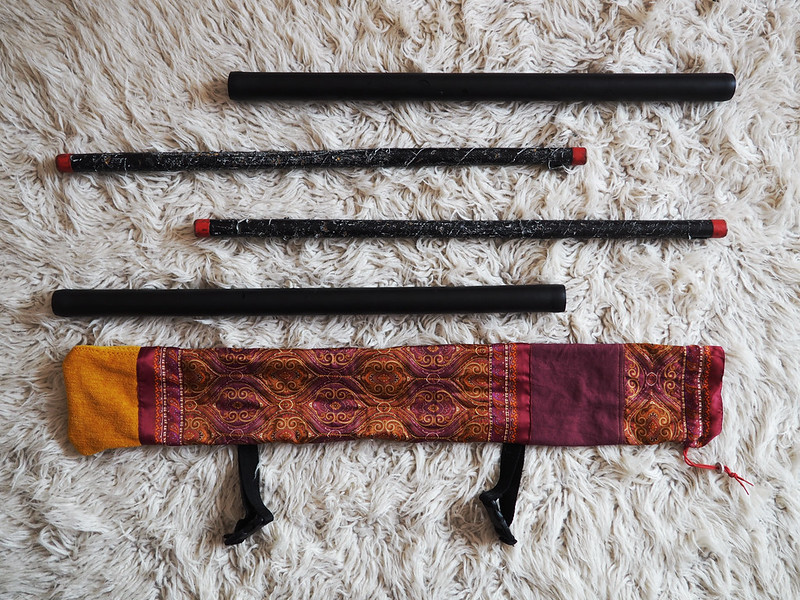 When he upgraded from the sports bag he’s used for over a decade to a slightly smaller and more nowadays-aesthetics one they were the only training equipment that didn’t quite fit so he asked me for a sleeve to put them into and somehow fasten to his bag. 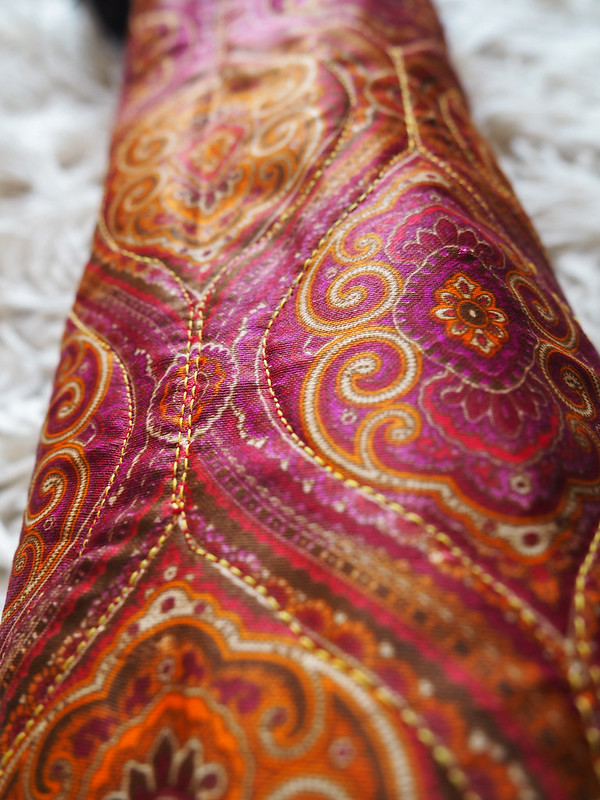 As mentioned above he’s quite colourful, more so than I and much brighter. He also likes paisley and swirling patterns, so after a bit of digging through my stash, I came up with this combination. 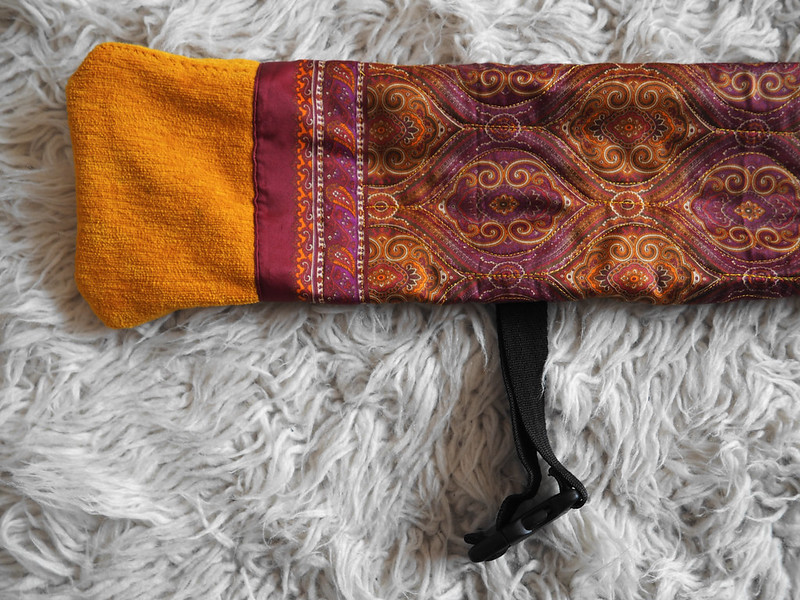 The main fabric used to be a small scarf that I’d bought at the thrift store on a whim – I do that sometimes just to discover it was meant for another person in my life all along and I was merely the messenger. The thicker yellow on the closed end is a leftover from a curtain someone in my family threw out ages ago, I remember sewing something from it in my teenage years. The dark red linen is a scrap from a pair of pants Scoundrel made for himself for a LARP character. It actually goes down to the yellow fabric, as well, and has an extra layer made from fleece leftovers for the quilting I did on the scarf. 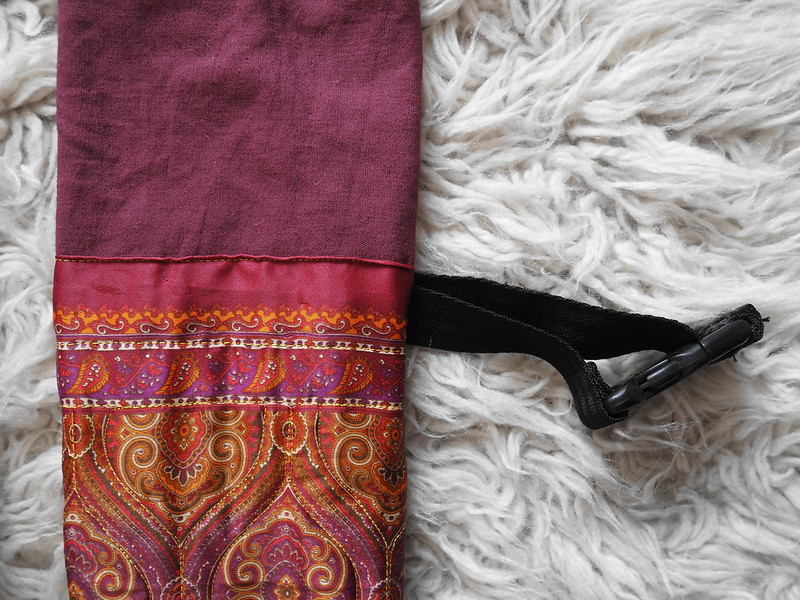 I took the hardware and straps from the old sports bag that wasn’t exactly mendable anymore and measured the distance between the new bag’s handles. Now he can simply clip the baston bag on when he needs it, and the straps are tight enough not to sway too much when he’s on his bike. 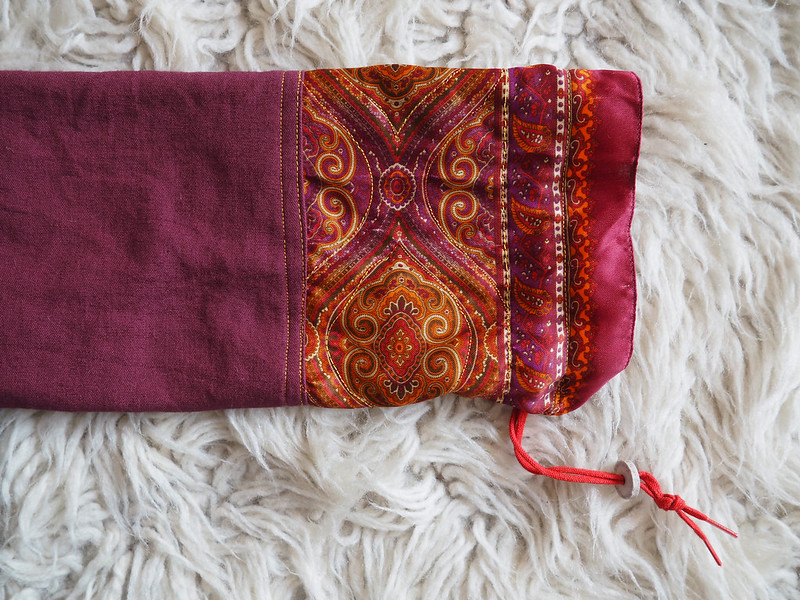 I used an old shoelace and a bead from a (you guessed it) thrifted necklace for the closure together with the rest of the scarf – the border was too good not to use for this.

I’m really happy how this turned out. The boyfriend is happy as well, and I like the thought that it’s not just practical but also matches his aesthetics so well.

Do you customise your stuff to match your aesthetics when you need something new? Let me know in the comments!

Have a lovely week, Thistledown Gang! ♥