So we all know Rossetti had a wombat.

The wombat is a joy, a triumph, a delight, a madness.

– D.G. Rossetti in a letter to his brother William, and probably one of my top 10 favourite quotes ever

Okay, maybe we don’t, so let’s start at this: Dante Gabriel Rossetti had a wombat.

The guy who painted this…

… had a wombat. And I’m infinitely jealous, because I want one, too. Back in the day when a certain political party was still votable and not just the bad joke it is nowadays they promised wombats to everyone. Yes, of course, I voted for them. My boyfriend gave me Diary of a Wombat for our anniversary a few years ago. Wombats are fantastic. But back to the Pre-Raphaelites and their wombats, because that’s a thing of beauty.

Rossetti acquired his first (allegedly there was a second about which I couldn’t find any more info on the web) wombat in 1869 after visiting the zoo regularly, especially, of course, the stoutest of marsupials. He even went to Paris to check up on the wombats there. Gabriel was definitely a fan. He had a growing menagerie anyways, so what better to top it off than a wombat?

There were […] two or more armadillos, rabbits, dormice and a racoon that hibernated in a chest of drawers. There were peacocks, parakeets, and kangaroos and wallabies, about which we know frustratingly little. There was a Canadian marmot or woodchuck, a Pomeranian puppy called Punch, an Irish deerhound called Wolf, a Japanese salamander and two laughing jackasses. We know the neighbours were tolerant up to a point but Thomas Carlyle, for one, was driven mad by the noise.

And I think my favourite thing about that wombat is that Rossetti named him after William f*cking Morris, a stout fellow and one of my favourite artists, socialists and dreamers.

His nickname among his friends was Topsy (how adorable is that for a perpetually grumpy looking, very bearded bloke who wants nothing more than bring upon the world a neo-Arthurian age?), and the animal was named Top. Rossetti was very, very much into Morris’ wife Jane at the time (it was mutual, one might add), by the way, which led to this picture:

Oh! How the family affections combat
Within this heart; and each hour flings a bomb at
My burning soul; neither from owl nor from bat
Can peace be gained, until I clasp my wombat!

– D.G. Rossetti in a letter to Jane Morris

Not so adorable is the fact that Top died mere months later (rumour has it that he ate a box of cigars or too many straw hats), but Gabriel wasn’t willing to let go and had him stuffed. Wombats made it not only under the murals at Oxford Union and onto a ton of sketches of the Pre-Raphaelite Brotherhood, but also onto the frontispiece of Gabriel’s sister’s Christina Rossetti’s Goblin Market:

I first encountered the whole story, by the way, via the cartoons of Raine Szramski, whose Pre-Raphernalia blog seems to be mostly abandoned now, sadly. If you are in any way interested in the PRB you should religiously read through her archive, though, and you can find her cartoons on the wombat here and here. It was also there that I found out about #wombatfriday ages ago,  and apparently there is also a Wombat Trail and at some point a Wombat Girl Gang at Red House, Morris’ family home from 1860 to 1865. 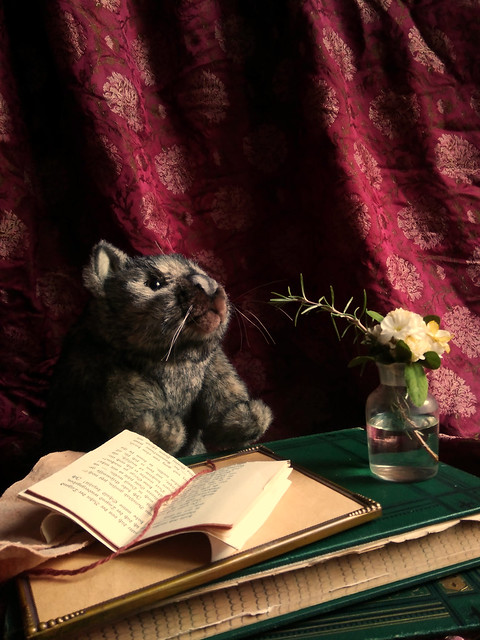 So with this background of my favourite art history fun fact ever I think it’s only understandable that when I met this little fellow at the thrift shop this week I immediately knew I had to adopt him (he seems to be the same species as the ones being out for adoption at Red House, too). Oh, and have I tried to be clever and sort of re-create this portrait of Jane Morris with the photograph above? Maybe. 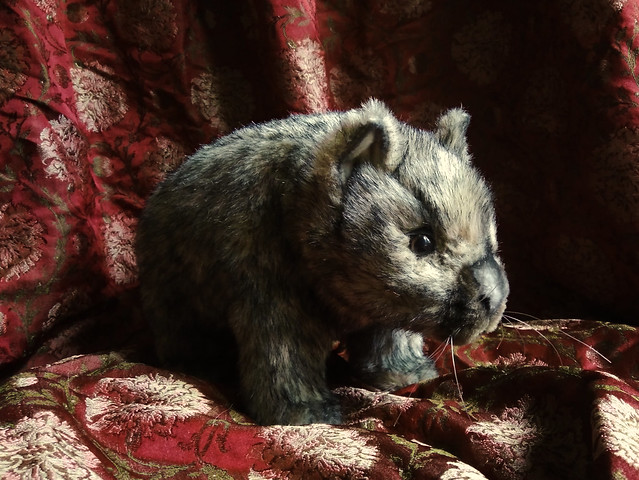 Keeping in tradition with other pre-raph wombats to be named after someone from their circles I call him Morris – Morris was the original name-giver of Gabriel’s wombat, he is one of my favourites, and it’s my favourite car’s manufacturer, so there’s that.
And now I finally have a wombat of my own, just in case I might want to participate in #wombatfriday in the future, and of course to make me happy whenever I look at him. The wombat is, after all, a delight.

Further Watching: Desperate Romantics (albeit without wombats, but with tons of “f*ckboy energy”, as my series soulmate calls it, courtesy of Dante Gabriel Rossetti), BBC 2009

As always I’m not sponsored by any of the parties linked or mentioned. If I were I’d let you know!