You’ve seen the projects, now prepare for the real tragedy…

UFO Friday is my (usually) bi-weekly series where I show you what projects I’ve been working on (UFO standing for UnFinished Objects). For more of these, look here and for every other week’s feature, Finished Things Saturday, look here. 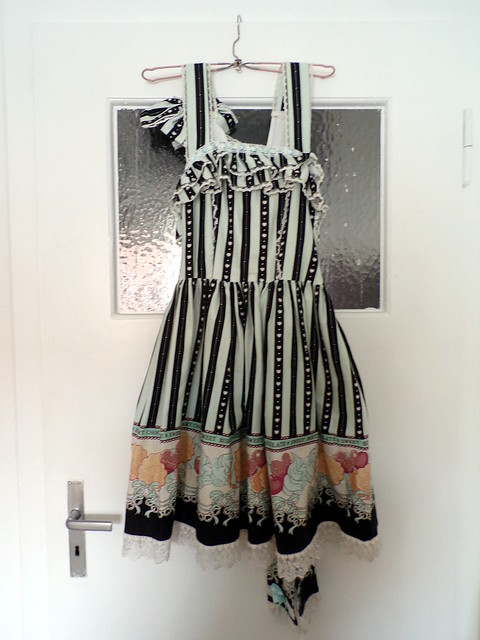 This week is less of a UFO and more of a short walk-through of one of the quickest projects I’ve had lately. I’ve had this Bodyline dress for ages now and have hardly worn it for several reasons, one being the dreaded boob loaf effect (you know, when a garment presses your breasts into one very unflattering, flat, well…, loaf. Especially horrible if you’re big-chested and the loaf suddenly reaches much further down than you’d like and you wonder what the point in bras is anyway… Anyway.). I’ve probably worn worse but the ruffles along the chest weren’t exactly helping, either. That being said I was and still am madly in love with the print that is called Sweet Biscuit (or at least that’s what I call it). Baked goods-themed prints are always something I’d happily throw some money after. 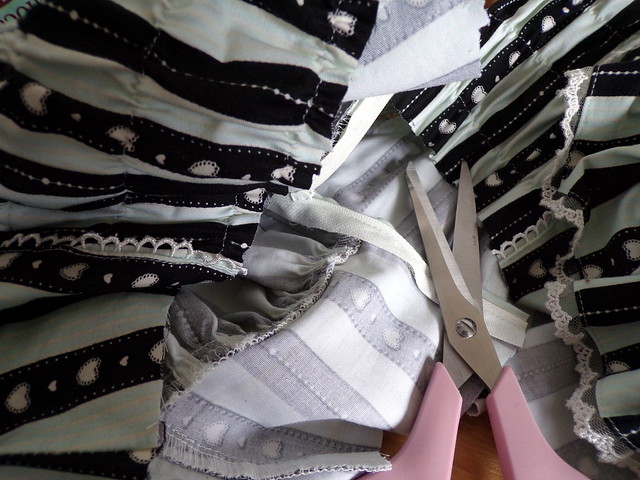 To make the JSK a bit more casually wearable – that’s the beauty of Bodyline, it’s affordable, hence there are far less scruples to wear it more frequently – and flattering I decided to turn it into a skirt instead.
Now the thing is shirred in the back but also has a zipper. I decided to keep both because that was, honestly, the easiest thing to do. I cut around the dress, keeping twice the height of the waistband I wanted for the skirt of the bodice. For the opened (!!!) zipper I switched from fabric to sturdy crafting scissors, snipped it off at where the waistband would end and then pinned the waistband down in half, tucking in the edge to have a clean finish. The shirring got included, I just had to pay attention to stretch it as I sewed to retain the intended use. I also sewed around the top edge for the whole affair to lie flat again. 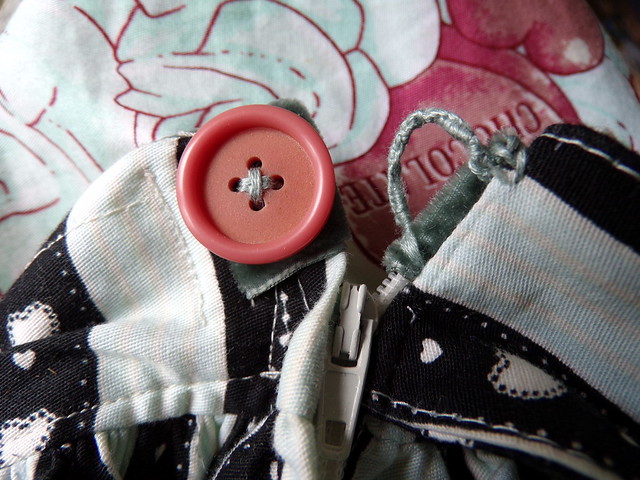 To easily finish off the zipper again I added some velvet ribbon I still had around, heat-sealed the edges (because luckily it was plastic fibre) and sewed it around the zipper’s ends. Now the thingy can’t fall off, and I also had an excuse to add a cute button from my stash and a loop made from embroidery yarn to close the thing properly and keep the zipper closed even through rougher movement. 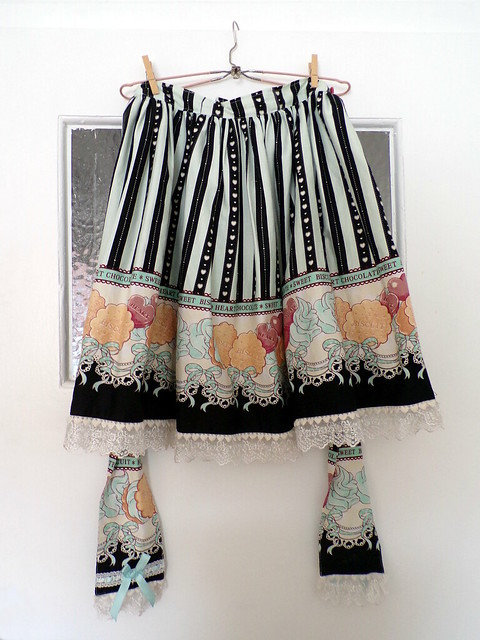 And that was it. I love quick projects because everything under an hour doesn’t cost me any UFO points (I’ll explain another time…) and I think this skirt will see much more wear again from now on. I still think about shortening it a tiny bit to the length of most of my everyday skirts but I can still do that another day.

What have you been working on lately? I’d love to read about it in the comments! Have a lovely weekend! ♥ 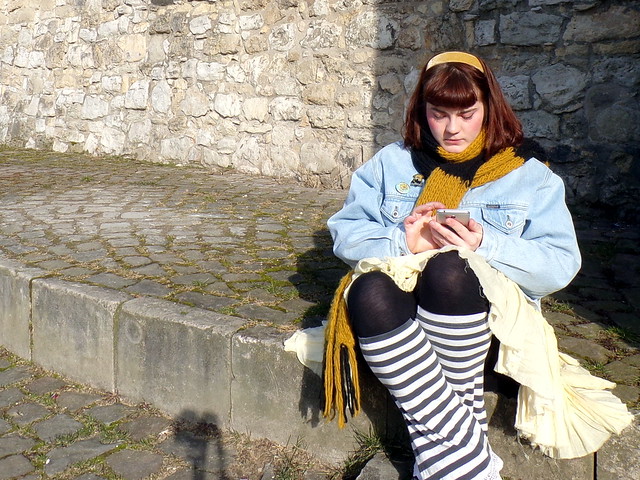 Remember how I said that I wanted to conquer my fear of taking outfit pictures in public in this vlog? One day later with the nicest weather imaginable I went out on adventures in the city and did exactly that.

By the way: This post is by no means sponsored by my phone’s manufacturer (ahaha… nope). Staring at my phone is merely how I cope with being “visible” in public while I’m on my own most of the time. There was also a discussion going on in our Changeling group chat I was invested in, but I probably would have been busy catching water Pokémon due to the close vicinity of the river otherwise… 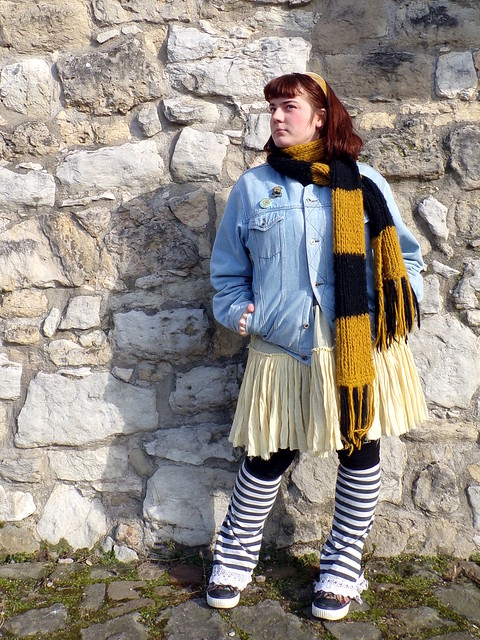 People looked at me, yes, but I picked a good spot for this kind of confrontational self-therapy – not too crowded, great lighting, in a corner so I couldn’t be seen from everywhere. I did it! I guess it helps that Northern Germans tend to keep to themselves so there’s not much going on in terms of unwanted commentary or unnecessary questions, and that Hanover is big enough to have its share of weird folk doing weird stuff. Still, for me this feels like a huge achievement. 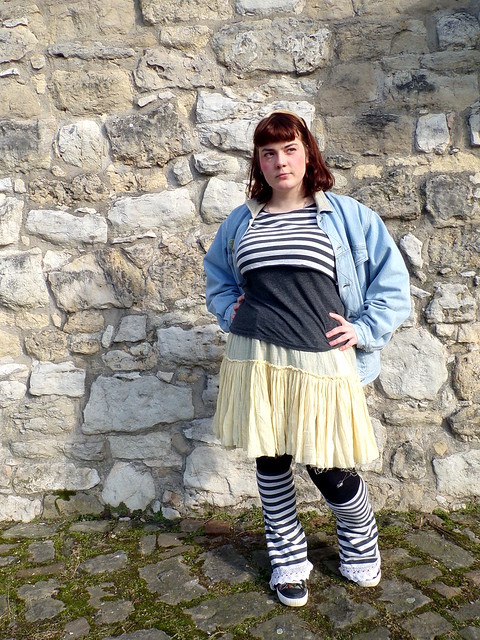 This jacket makes me feel weirdly confident. It’s by far not the most flattering piece of clothing I own but it is incredibly cozy and warm and soft with a flannel lining and big pockets. It’s a hand-me-down from Rusty’s Mum’s partner (it’s complicated but nice), probably from the 80s or 90s. I had originally planned to make it a bit more fitted but I’ve come to appreciate its bulkiness, somehow. 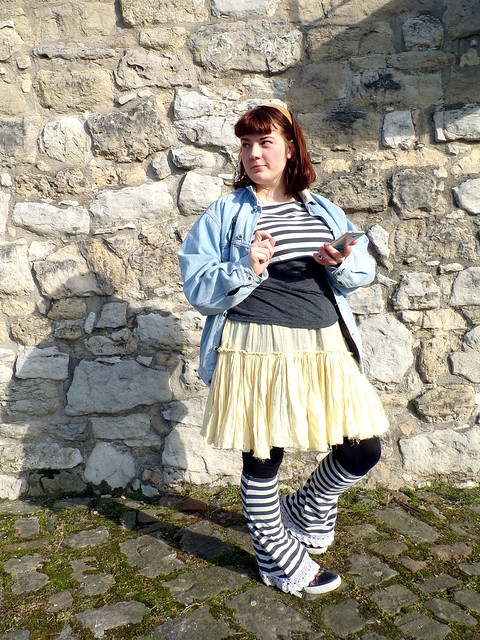 UFO Friday is my (usually) bi-weekly series where I show you what projects I’ve been working on (UFO stands for UnFinished Objects). For more of these, look here and for every other week’s feature, Finished Things Saturday, look here. 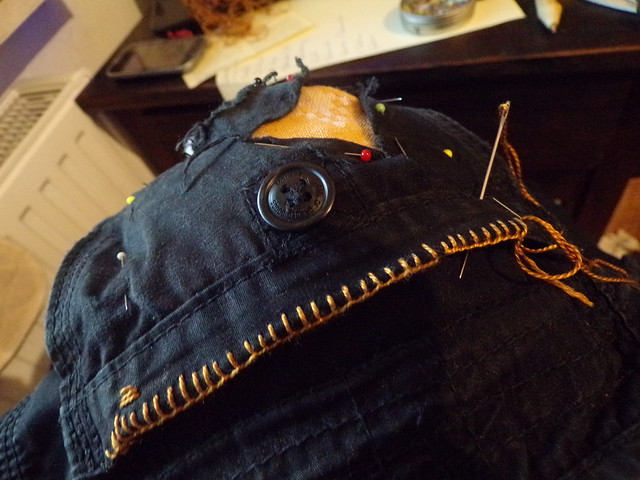 I’m mainly maintaining stuff at the moment, like darning and mending. I’m quite taken with the idea of decorative mending (Rhiannon wrote about it here, too) and one of the back pockets of one pair of my cargo pants needed fixing. I love the contrast of yellow and black, and it reminds me not only of my Hogwarts house but also of (bumble)bees and honey.

I’m also working towards ConQuest, I can hardly wait! There is still so much stuff to do – projects and character writing for our two new “recruits” and trying out new recipes. I was really excited so I drew another cross-out countdown calendar this year, and the people really liked it so far. I’ll be using the original one, of course, it just needs colouring now.

Have a wonderful weekend! ♥